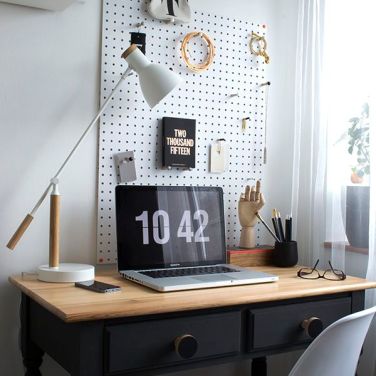 I’m not going to lie. There’s not been as much crafting at the Toombs house in recent days. I do wonder how I managed to make a tipi, a mobile, sew cloud cushions, mould bath bombs, make 2 christmas puddings and hand tie tutus for the month of December last year. I guess the baby was not mobile, or so vocal.

This year the DIY comes more in the form of sourcing cheaper versions of cool expensive things. Ok. It’s not actually DIY at all. We’re planning some big room move around in the next few months and all excitement is set on the bigger 2 and their planning of their ‘cool new rooms’. I’ve been trying to hold back from getting them TOO many bits for them for Christmas. There is no where to put it all until the move happens but at the same time I do love being able to buy useful Christmas gifts. The pictures above are my pinterest goals. They both will need to priorotise a working desk space in their new rooms and though they both love the retro industrial look I want to make sure each of their spaces are characterised differently to mark the move from a shared boy/girl room into seperate spaces.

I love these retro peg boards. We had one in our old office which was still around from the 70s. I didn’t expect I’d be hunting online a couple of years later and seeing small pieces available for around the £90 mark. I wanted one for Elijah’s room that would be big enough to spread most of the width of a desk and they were looking rather pricey so I found a plain board on ebay for the grand sum of £6. I’ve taken some duck-egg Annie Sloan chalk paint to it and think it will do the trick just nicely. I just need to hunt down the best mix of attatchments to hang things from and love some of the bright pegs and shelves I’ve seen but have no idea where to source things like that from.

The grid is perfect for what I have in mind for Hollys room. I bought this 4 foot version for just under £20 from amazon. Again, its to span the width of the desk. For Christmas I plan to style it up for her with motivational postcards, prints, washi tape and bright bulldog clips. I think that might be more appealing than the plain grid in a bin bag that is currenty sitting in the loft!

I’m really keen to hear any suggestions of peg board accessories. I did order some really cure shaped wooden ones… which happen to be about 10x too big for the holes. Maths fail on that one. I have no idea what I was thinking.